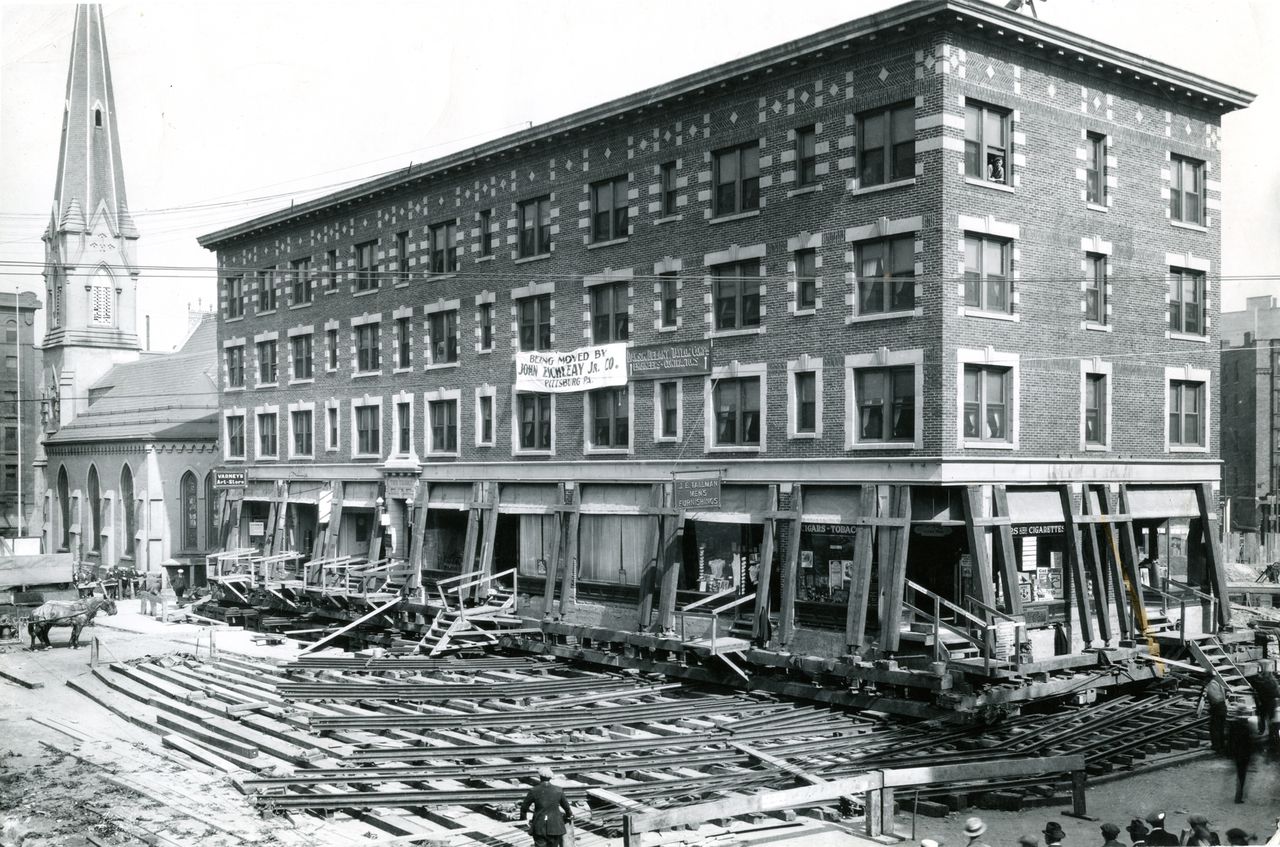 Why did the £12m hotel cross the road? To make way for the Syracuse Hotel

As Syracuse’s population and attractions exploded in the 1920s, developers made plans for an opulent, $5 million, 600-room hotel at the intersection of Warren, Harrison, and Onondaga. They would call it the Syracuse Hotel.

But there was a big problem: a small hotel was already occupying the space where they wanted to build.

Rather than raze this hotel, engineers and planners undertook one of the most amazing engineering feats in Syracuse’s history: they scooped up the 12 million pound, or 6,200 ton, building and moved across the street. And they did it without even breaking a window or even turning off the lights.

The four-story brick building — about 144 feet long with 126 rooms — was one of many standing in the way of the new Syracuse Hotel project.

While the others were torn down, the Syracuse Hotel Corporation had something different in mind for the Truax.

It would be moved across the street.

Buildings like this had been moved before. What made this project different was that the planners wanted to keep the hotel’s frontage on Harrison Street, which meant it couldn’t just be pulled across the road.

The entire hotel, left intact, would have to be turned 180 degrees before it could be moved.

But the building could then be used as retail, offices and staff accommodation for the Syracuse Hotel. It was cheaper to move the Truax than to build a new building.

(The winning bid came from a Pittsburgh firm, John Eichleay & Company, which would work with three local construction companies — Dawson, Delany and Taylor — to complete the project.)

“How are they going to do it?” was the question on many Syracuse minds in 1922. It seemed nearly impossible to lift a hotel from its foundation, transform it, and then pull the 6,200-ton structure into its new position.

“It’s a business that would have strained the imagination of another generation,” the Herald said on April 16, 1922.

Overseeing the project would be a native of Auburn, NY, Allen Clymer Austinwho was already known to hold patents on several inventions, including a mechanical cotton picker and a garment press.

Austin said moving the hotel was simple, like moving a frame house, but “on a bigger scale.”

The Truax would be cut from its foundation with air scissors, lifted and placed on steel rollers on rails, then turned and pulled by a team of horses through Harrison Street.

During the hotel’s move, its brick foundation would be dismantled and rebuilt in its new home.

Incredibly, all of this work would be done while business was going on inside the hotel.

Guests stayed at the hotel as he moved slowly. The shops on the ground floor remained open, including the hair salon.

Rubber pipes were used instead of gas, water and sewage pipes, electrical wires were lengthened and a large water heater was fixed under the floor with hooks.

Austin predicted it would take 90 days to complete the project once it started in the spring.

“It’s like moving a birdhouse,” he said, promising to move it “without breaking an egg into it.”

To make sure nothing happened to the Truax’s structure as it was moved, two Syracuse Hotel Corporation employees, Grace Marr and Ruby Reed, had the tedious task of counting the cracks in the plaster and walls of the hotel for eight long hours on May 23 to compare when the project was complete.

By June 6, the structure had been lifted eight feet and was ready to be placed on the steel rollers.

The “portable” hotel in Syracuse began its journey on June 16.

“Two teams of horses launched the Truax Hotel on its whirlwind course through Harrison Street this morning,” the Herald reported. “A large crowd gathered to watch the unusual proceedings.”

In the afternoon, the hotel had moved only a few meters. Horses could only pull for a minute at a time, and progress was measured in inches.

It seemed like everyone wanted to see the action.

‘Business in the barber shop and most of the first floor shops was reportedly busier than usual, due to crowds gathering to watch the operations,’ the Herald reported on June 25.

It was the topic of conversation around Syracuse that summer.

“Of course, the Truax hotel could be moved quickly by asking part of the large committee of spectators to pull the ropes,” quipped an editorial in the newspaper.

Another wondered why a visiting circus’ herd of elephants couldn’t be hired to help with the move.

A little cartoon joked on June 20:

“Unverified is the report that there is a man in Syracuse who made no criticism of the engineering methods used to move the Truax Hotel.”

Work stopped on June 22 when the site was visited by a group of showgirls, performing at “The Son Dodger” at nearby Keith’s Theatre.

Taking pity on the horses struggling in the heat of the day, the performers took control of the windlass and attempted to push the hotel on their own.

“How much does that damned thing weigh?” Helen asked, after the hotel hadn’t moved.

Besides the occasional visit from showgirls, the rain was the only thing that got in the way of work. Severe storms, which flooded parts of the city this summer, slowed progress for days.

By July 1, the Truax had been completely rotated and was ready to be pushed into its final position.

Less than two weeks later, the hotel was to be lowered to its new foundations.

Slowly lowered over a period of days, it took 20 men to do the job.

“This work is necessarily very slow,” said the Herald, “great care must be exercised so as not to crack the walls.”

The work was completed at the end of August, almost exactly 90 days as Austin had promised.

Engineers and trade journals around the world were interested and amazed by the achievement.

It was the largest building of its type to be moved intact up to that time. And the fact that it had to be completely transformed while remaining open for business makes the accomplishment even greater.

“Syracuse is proud of its new hotel”, a Post-Standard editorial after its gala opening, “imposing, beautiful, adequate, finished and furnished as attractively and comfortably furnished as craftsmanship knows how.”

Workers with bulldozers and a crane will return to the Truax Hotel on July 25, 1968 to finally demolish it.

“The shaving for an as yet unspecified reason by owner Dr. Robert B. Bersani brought back memories to area residents of when the hotel was relocated,” The Post-Standard said.

The space would be used as a parking lot.

Opened during World War II, Bristol Myers in Syracuse was the largest penicillin manufacturer in the world in 1950

No runs were scored in 15 innings, but Syracuse’s baseball game was declared the ‘greatest’ in history

Syracuse mobilizes to save a young Ukrainian immigrant from deportation

This feature is part of CNY Nostalgia, a section on www.syracuse.com. Send your ideas and curiosities to Johnathan Croyle at [email protected] or call 315-427-3958.

Internet Explorer RIP: Here are 10 things as old as the expired browser