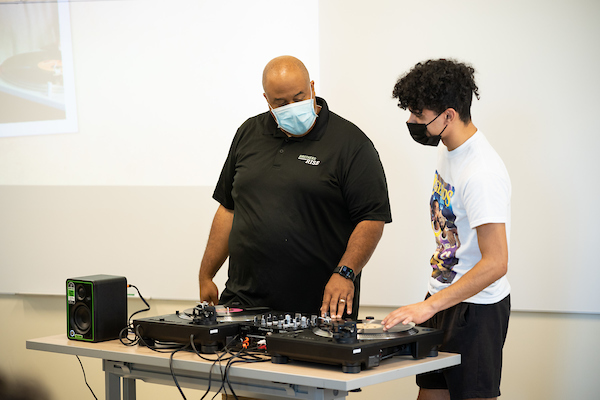 Ohio University’s Patton College of Education is changing the look and sound of classrooms. For the first time, the college is bringing hip-hop culture to the classroom and striving to put black men at the forefront of those classrooms.

New initiatives include Hip-Hop Ohio Patton Education (HOPE), which seeks to use the cultural pedagogy of hip-hop to train future teachers to strengthen bonds with students, and Brothers Rallying to Inspire and Shape Education (BrothersRISE), which aims to train more black men as teachers. The programs are led by hip-hop producer and educator, Dr. Jason Rawls.

“(HOPE) is the accomplishment of something I’ve always dreamed of,” Rawls said. “Even though as a teacher you’re not into hip-hop, you can have students who are, and my class teaches you how to take that and use it to help build relationships. relations with students. ”

These relationships are at the heart of the program. According to Rawls, the goal is not to rap in the classroom, but to bring to the fore an often unknown cultural subset in classrooms and to foster natural and organic relationships between students and teachers. Rawls, who began his career in schools in Columbus City, believes students who see their culture in the classroom mean everything.

BrothersRISE is produced in conjunction with HOPE to help solve a problem in the state of Ohio where less than one percent of teachers are black men.

André Martin is one of these future educators. He transferred to OHIO this fall after being recruited into the program by Rawls and Middleton.

Martin said that a big factor in his decision to join the program was the fact that they made the effort to recruit him.

“For me, the fact that they came to my house… showed me that they really cared about me,” Martin said. “They made Ohio University feel more like home than my current hometown of Columbus.”

Rawls says the curriculum isn’t necessarily about race, but about students seeing teachers who look like them, which is a big factor for Martin.

“Growing up I lived in the city center, but openly enrolled in the suburbs and didn’t have a lot of black and male teachers, and some teachers just don’t understand their students’ backgrounds. “said Martin. “Going to a suburban school and not having a teacher of color was a big challenge for me because I wasn’t used to not having people who looked like me. ”

Martin explained that he was treated very differently as a city student of color attending a predominantly white suburban school, and that motivated him to one day be able to help students like himself.

His main goal after graduation is to work as a sports director and work with young people in the city center. He believes this program is a springboard that will make him a better communicator and a better leader.

One of the first classes Martin and other BrothersRISE students take at Ohio University is the HOPE Hip-Hop and Education Class. Martin describes the courses as an incredible opportunity.

“If you come from a background where hip-hop culture is important to you, the class makes you love doing the job 10 times more,” Martin said.

Martin says the bonds he creates in these programs will last a lifetime. He is convinced that he will leave Ohio University with a professional network of educators sharing the same goals.

Both programs are in their first semester, but the results are already visible.

“What I see is that the students arriving in the classroom don’t quite understand what it is, but now that we are in a few weeks, they understand that they are putting culturally relevant pedagogy into the classroom. their teaching, and a lot of students are enthusiastic about it, ”Rawls said.

How the program will impact classrooms across the state has yet to be determined, but Rawls says sentiment in the program is positive right now and the future looks bright. For Rawls, the goal is to one day see HOPE offered in Ohio schools with BrothersRISE graduates putting the material to use.

Understanding Maps and Sets in JavaScript

Codemeter and Javascript share an underlying principle of universal versatility