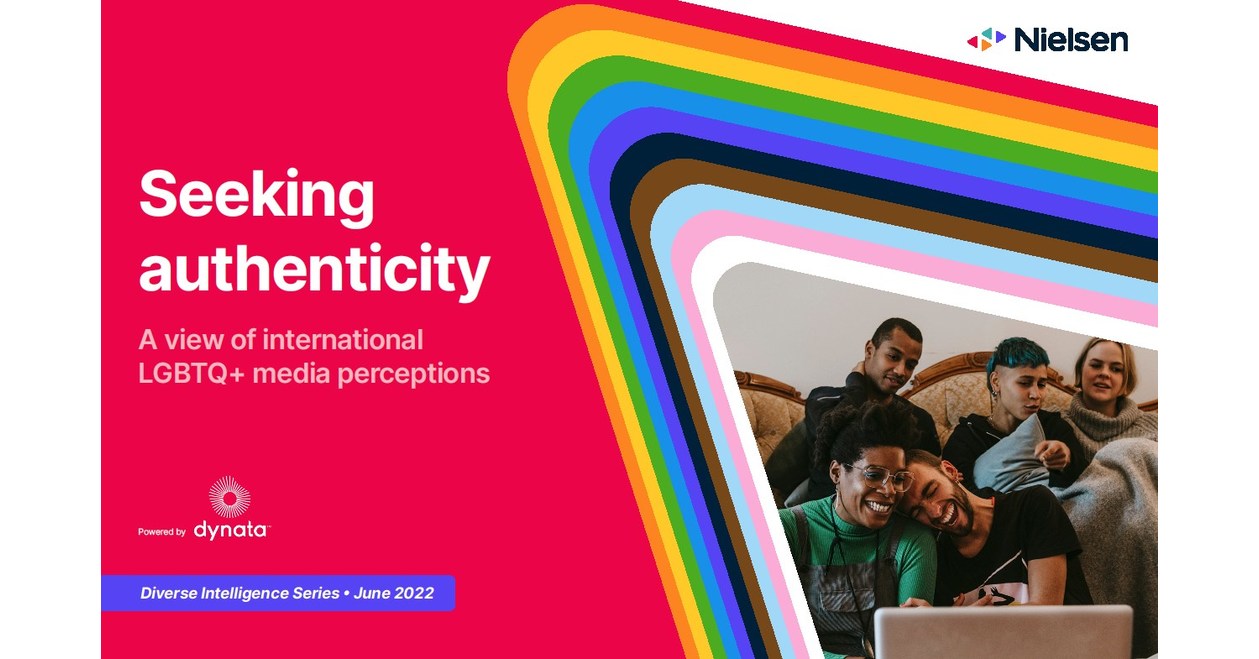 NEW YORK, June 21, 2022 /PRNewswire/ — Nielsen (NYSE: NLSN) released its 2022 LGBTQ+ Diverse Intelligence Series report – In Search of Authenticity: A View of International LGBTQ+ Media Perceptions – which revealed that LGBTQ+ respondents find streaming content to be the most inclusive of their identity group compared to other media platforms. On average, 69% of LGBTQ+ audiences globally say they believe efforts are being made to improve inclusivity in the media, but 27% believe the level of inclusion has not changed and a small percentage believe the inclusion has declined in recent years.

Inclusion in content is seen as focusing primarily on gay and lesbian identities, leaving many people vastly underrepresented.

The report, based on a survey of nearly 5,500 people in the United States, Canada, Mexico, Italy, Germany, France, Brazil, Spain and the UK in 2021 and Q1 2022 and powered by Dynata, found that on average, LGBTQ+ people are 10% more likely to find streaming services to be the most inclusive media platform and 5% more likely to favor social media as being more inclusive, compared to self-identifying non-LGBTQ+ respondents. According to the report, the LGBTQ+ community is looking to the media industry and the brands that support it to provide more accurate portrayals of LGBTQ+ people. Avoiding stereotypes and providing more authentic/realistic portrayals of LGBTQ+ people in content and advertising are the best ways to improve inclusivity.

The report includes additional data on the importance of creating more LGBTQ+-inclusive content and ads.

Although LGBTQ+ inclusion in the media has increased dramatically over the past 20 years, there is still a long way to go. According Gracenote Worldwide Video Datathere were more 817,000 unique video titles on traditional TV and streaming services from February 2022, but just over 1,000 in the LGBTQ+ related genre. The number of new titles premiering in the LGBTQ+ genre has actually increased from 50 titles in 2020 to 36 titles in 2021.

Brands need to embrace inclusion and design campaigns focused on the LGBTQ+ community. More than a third of LGBTQ+ respondents globally are comfortable with LGBTQ-specific campaigns. In the nine countries studied, more than half of LGBTQ+ respondents in the United States and Mexico indicated that they are open to brand messages aimed at their community.

LGBTQ+ people’s perceptions of the evolution of inclusion in media and advertising differ by sexual orientation and country. While overall inclusion is improving, this inclusion focuses primarily on gay and lesbian identities, leaving many people vastly underrepresented. For example, 80% of transgender men and 69% of bisexual/pansexual men think advertising is very non-inclusive. About 6% of LGBTQ+ respondents in Canada and 5% in Brazil perceive a reduction in inclusion in the media over the past two years.

“Around the world, the LGBTQ+ community continues to face significant challenges, but the global media industry can play a role in facilitating positive change and providing more accurate portrayals of LGBTQ+ people,” said Sandra Sims-Williams, Nielsen’s Chief Diversity Officer. “Our survey shows that members of the LGBTQ+ community are willing to share their needs and lived experiences, so advertisers and media publishers can start a conversation and create content that’s true to the community.”

“As content becomes increasingly borderless, global inclusion and accurate portrayals of the LGBTQ+ community are critical and can have lasting impact,” said GLAAD President and CEO. Sarah Kate Ellis. “Nielsen’s groundbreaking report not only provides insight into how the media industry can best engage with LGBTQ+ audiences in nine countries, but also a clear incentive to create more nuanced global narratives and increase the diversity of LGBTQ+ talent both on-screen and behind-the-scenes.”

About NielsenNielsen shapes the world’s media and content as a global leader in audience measurement, data and analytics. Through our understanding of people and their behaviors across all channels and platforms, we empower our clients with independent, actionable insights so they can connect and engage with their audience, now and in the future. .

An S&P 500 company, Nielsen (NYSE: NLSN) operates globally in more than 55 countries. To learn more, visit www.nielsen.com or www.nielsen.com/investors and join us on social media.