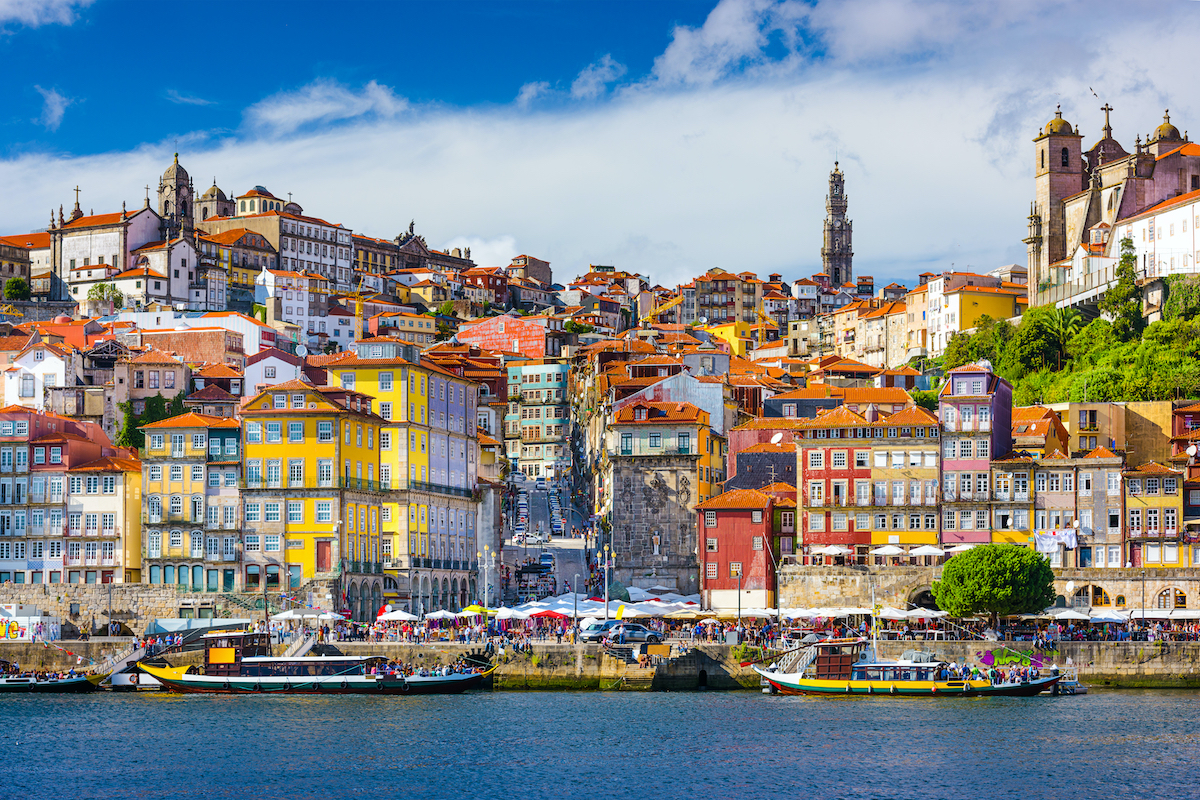 16 Best Experiences In The Port Wine Capital Of The World

In 1996, UNESCO declared Porto, the Historic Area of â€‹â€‹Portugal, a World Heritage Site, and in 2001, Portugal’s second city was chosen as the European Capital of Culture. As a result, authorities have spent large sums to revitalize the city, creating areas reserved for pedestrians and opening a metro system to facilitate passenger travel, while preserving the historic character of the city. With a rich history dating back to the 8th century BC.

Situated on the Douro River, with its famous bridges, this old town with its steep cobbled streets, exceptional Romanesque architecture, historic azulejos, world-class wine cellars and gastronomy built around the sea, enjoys a climate comfortable all year round. From steep and narrow lanes to long stretches of sandy beaches, a modern metro system to rocky historic trams, food for any palate paired with its world-class local wines, Porto, and incredibly hospitable people is a gem. which is not being discovered. Whether you’re visiting for a long weekend or a longer break, here are a few items for your to-do list.

1. Locate the error in the Estacao De SÃ£o Bento station

Built on the site of the former Convent of S. Bento de Ave-Maria, the current century-old station attracts tourists for its superb 20,000 azulejos (tiles) that adorn the building’s foyer. Representing scenes from Portuguese history, it took 4 years to paint and install the blue and white azulejos. If you look closely you might be able to spot painter Jorge Colaco’s slight mistake – hint: it involves children and proportions.

Sandwiched between two elaborate churches (Igreja dos Carmelitas DescalÃ§os and Igreja do Carmo – for Carmelites and Carmelite monks) lies the Hidden House of Porto. At just over 3 feet wide, this three story home is easily missed but, for a small fee, well worth a look.

A short 50-minute boat ride along the Douro River takes you under Porto’s six bridges and offers a simple and unique perspective on the different designs of river crossings. The tour is a relaxing way of sightseeing while recovering from a perfect lunch and before setting out on foot again.

4. Capture this Instagram-ready sunset in Gaia

For the best views of Porto’s Ribeira (waterfront), head to Gaia. Cross the Douro River on the Dom Luis I Bridge on foot or take the metro to Jardim Do Morro station. This grassy hill is a favorite spot for locals and tourists alike to sit and watch the sunset over the Douro River and see Porto’s waterfront district light up like a Hallmark Christmas card.

In a city rich in history, culture and architecture, it’s kind of a commentary on the world today that the only place we saw with tourists lining up to enter was the Livraria Lello bookstore in the Vitoria district. Undoubtedly a spectacular bookstore with a double helix staircase, the bookstore would have been the inspiration for JKRowling’s Harry Potter series. There is an entry fee of 5 euros exchangeable against any purchase. Apparently, however, Rowling said she never entered the bookstore!

6. Have afternoon tea at the Majestic CafÃ©

One place Rowling has been is the large 1920s Majestic CafÃ© located on the Old Town’s main street, Rua Da Santa Catarina. (Apparently she spent time here working on her Harry Potter books.) With its crystal chandeliers, elaborate woodwork, and white-jacketed waiters, the afternoon tea here is a throwback to the 1920s and 30 when Portugal’s social elites gathered here for the best coffee and pastries in town and it’s an absolute must to pick me up mid afternoon.

Hidden gems of the city

Located next to PraÃ§a Carlos Alberto, it is partly a museum and a bank of Portugal’s famous and historical azulejos. Over the decades, tiles have been damaged, lost or stolen and building owners today struggle to find tiles to restore their buildings. The bank is a depository for tens of thousands of azulejos that have been salvaged from damaged or demolished buildings and are available free for city restoration projects. It might sound boring, but it’s actually a cool tour.

8. Go up to the Miradouro Da Vitoria belvedere

One of the best places to get a panoramic view of the city is the Miradouro da Vitoria lookout point in the old Jewish quarter. (Jews were expelled during the Inquisition, although a number continued their faith in secret.) The neighborhood is now a bit run down with abandoned houses (the site of a future hotel perhaps) but the rise in the narrow streets worth it for the views.

The spectacular Romanesque Cathedral is a starting point of the Portuguese Way (the Portuguese pilgrimage route of the Camino de Santiago) and another great place to understand the role of religion in this region. You can see 10 churches from this vantage point. A walk through the steep, narrow, atmospheric alleys down to the river would have been discouraged years ago as this area was populated by drug addicts. Today locals live side by side with Airbnbs and it’s perfectly safe to explore.

10. Grab a burger from the world’s finest fast food restaurant

The old Imperial CafÃ© (now McDonald’s) has retained its 1930s grandeur. With art deco stained glass windows, sparkling chandeliers and an eagle on the facade, queuing for a Big Mac has never been so enjoyable.

11. Buy something healthier at the market

Porto’s two-story market, Mercado do BolhÃ£o, is currently undergoing renovations but must be on everyone’s must-see list when it reopens (hopefully by the end of 2021). Built in 1914 and listed as a ‘Monument of Public Interest’ in 2013, this two-story architectural masterpiece resembles two small stadiums combined, each with an open central forum housing individually roofed stalls. You can find it all here – from seafood to cold cuts, fruit and veg, flowers to linens, sweets, drinks, and a number of coffees. BolhÃ£o vendors are temporarily housed in the clean and bright La Vie Porto shopping center.

No visit to Porto would be complete without the experience of Francesinha. Although popular throughout Portugal, this famous sandwich originated from here in Porto. Meaning “little Frenchie”, this is an improved version of the French Croque Monsieur. Between two slices of bread, the salted ham, linguiÃ§a, sausage and steak are wrapped together, covered with melted cheese and topped with a spicy beer and tomato sauce. For the full offer, a fried egg is added on top and is usually served with fries. One of the most famous Francesinha restaurants in Porto is Santiago.

Crossing the Dom Luis I Bridge over the Douro brings you from downtown Porto to Vila Nova De Gaia (or simply Gaia for the locals) – the traditional home of the Port wine trade. With plenty of waterfront restaurants and outdoor seating, this is a great place to sip a port and take in the views. Watch traditional Rabelo boats float on the water, vendors selling their wares on waterfront stalls (and see unlicensed vendors disperse as soon as a policeman’s shadow appears!)

14. Ditch the tourist label and eat with the locals

We joined two young French people and had dinner with a local couple in their apartment via “Eat With Locals”. It’s a great way to stop behaving like a tourist and immerse yourself in the culture with welcoming locals. Our menu was based on pork (a taste of Porctugal) accompanied by delicious wines and a culinary history. A very social, educational and fun evening to make new friends which provided a pleasant alternative to another restaurant visit.

There are many Port tasting tours, mostly located in Gaia. We chose the Burmester Caves just at the end of the Dom Luis I Bridge. Joining a group of about 20, we discovered port – who knew the difference between “tawny”, “ruby” and “vintage?” toured the cellars with their large oak barrels and, of course, got to taste two or three varieties. The visit, including the tasting, lasted about an hour. We brought some home!

16. Take a walk along the promenade in Foz Do Douro

Head to the mouth of the Douro River in Foz Do Douro – an upscale neighborhood just 20 minutes by tram from the Ribeira. Yellow Tram 1 hugs the waterfront as it slams along the tracks offering Instagram-ready views of the waterfront. Once at the terminus, linger for a moment to watch the driver turn around for the return trip. She lifted her wooden seat and moved it to the other cabin ready for the return trip, turned each wooden bench upside down to keep the passengers facing forward, then got out to turn the pantograph over. .

Then set off to watch the Atlantic waves crash against the base of the lighthouse, put sand between your toes on the sandy beach, or take a stroll along the palm-fringed promenade.

However you choose to spend your time, this low-key city has something for everyone.

Find out more about Portugal with these articles: